Current, since 2019 year, IWF Heavyweight champion Ivan Markov is merciless to his rivals, smashing them out of his way, like a locomotive. Few of the current wrestlers can fight on equal terms with this monster, because for any mistake he punishes immediately and without any pity. The combination of athleticism, strength and vast experience made Lokomotiv an ideal wrestling machine, whose power has already been experienced by many wrestlers around the world.
Whether it's a team fight, one-on-one fight or a hardcore match with weapons, it doesn't matter at all. Ivan Markov "Lokomotiv" is deadly in every kind of fight. Today this man is the most titled wrestler in Russia, with a collection of belts and trophies not only from ours, but also from foreign promotions.
Having united in 2018 with Mikhail Vakhneev in the “OK” team, Lokomotiv began to call itself the “God of Wrestling”; Vakhneev became the "First after God". And now they are actively terrorizing the IWF and NSW rosters. Will someone be able to resist this force? 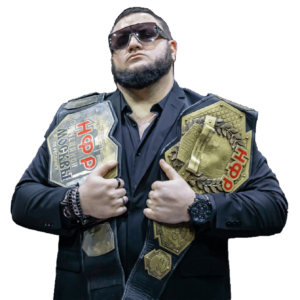